Carrozzeria Scaglietti (Italian pronunciation: [karrottseˈriːa skaʎˈʎetti]) was an Italian automobile design and coachbuilding company active in the 1950s. It was founded by Sergio Scaglietti in 1951 as an automobile repair concern, but was located across the road from Ferrari in Maranello outside Modena, Italy.

Scaglietti gained Enzo Ferrari's trust and respect both through his bodywork and design skills and for providing a retreat for young Dino Ferrari. Their professional relationship began when Ferrari asked Scaglietti to repair and modify race car bodywork in the late 1940s, which was soon followed by orders for full car bodies in the early 1950s. Scaglietti and Dino Ferrari designed a 166 MM, s/n 0050M, the first Ferrari to have a "headrest" bump. This feature was subsequently used on most racing Ferraris of the 1950s and 1960s. The idea was initially despised by Enzo but championed by Dino, and 0050M's design became an overall success. The car became a prototype for the Monza range.

In the mid-1950s, Scaglietti became the Carrozzeria of choice for Ferrari's racing efforts. Many sports racing prototypes were designed and manufactured at their facility. All those exclusively designed by Scaglietti carried the Scaglietti & C. badge while cars built to outside designs did not. The company's 1958 250 Testa Rossa, with its Formula One-inspired pontoon fenders, is one of the most famous Scaglietti designs. Several of Ferrari's most coveted models such as the 250 California Spyder, 250 GTO and 250 Tour de France were built by Scaglietti to a Pinin Farina design.

Today, the former Scaglietti works is owned by Ferrari and used to produce Ferrari's current line of aluminium bodied cars, including the 488 and F12, using both modern and traditional techniques. In 2002, a special edition of the 456, the 456M GT Scaglietti was named in honor of Scaglietti. This was followed by the 2004 introduction of the 612 Scaglietti, a 2+2 GT car produced until 2010. Despite names honoring Scaglietti, both the 456 and 612 were designed by Pininfarina. 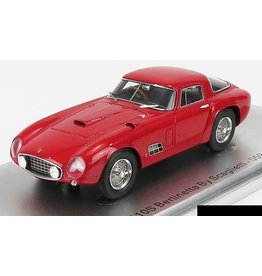