Auto Union AG, Chemnitz, was an amalgamation of four German automobile manufacturers, founded in 1932 and established in 1936 in Chemnitz, Saxony. It is the immediate predecessor of Audi as it is known today.

As well as acting as an umbrella firm for its four constituent brands (Audi, Horch, DKW, Wanderer), Auto Union is widely known for its racing team (Auto Union Rennabteilung, based at Horch works in Zwickau/Saxony). The Silver Arrows of the two German teams (Mercedes-Benz and Auto Union) dominated not only GP car racing from 1934 onwards but set records that would take decades to beat, such as the fastest speed ever attained on a public road (at 432.7 km/h (268.9 mph), a record lasting until 2017. After being reduced to near ruin in the aftermath of World War II, Auto Union was re-founded in Ingolstadt, Bavaria in 1949, ultimately evolving into the modern day Audi company following its takeover by Volkswagen in 1964 and later merger with NSU Motorenwerke in 1969.

The current corporate entity which bears the Auto Union name – Auto Union GmbH – was founded in 1985 and is a wholly owned subsidiary of Audi AG; its purpose is to act as owner of Auto Union's historical trademarks and intellectual property, as well as managing Audi's heritage operations. The company's distinctive logo, of four interlocking rings to represent the original four members of the Auto Union, survives as the logo of Audi. 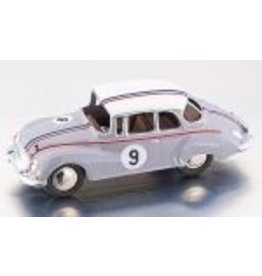