The American Sunroof Company has one of the most interesting histories I've seen in a while. They are responsible for some of the weirdest convertible cars, like the Dakota convertible, and many others.

HISTORY OF THE COMPANY

You may better know American Sunroof Company as ASC, or as American Specialty Cars, and they changed their name to that in 2004.

Founded by Heinz Prechter in the early-mid 1960s in California (different sources state different years and cities), they specialized in creating specialty-use convertible conversions for a variety of manufacturers over the years. At the time, Prechter was a German foreign exchange student attending San Francisco State College, and his entire life, he was fascinated by the automobile.

Soon after starting his company, Prechter found himself having mild success with local dealers who wanted sunroofs installed on their cars. Soon after, he was installing sunroofs on Hollywood celebrities such as Steve McQueen. A short time later, Ford asked car customization expert George Barris if he knew of anyone who could install a sunroof in a Lincoln, and Barris recommended Mr. Prechter.

Because of this recommendation, Prechter was soon installing sunroofs for many special projects for Ford, and soon enough, in 1967, Prechter landed himself a contract with Ford to install sunroofs on 200 Ford Cougars. He got to work in a former car wash, and when he finished one batch, a new one appeared for him to convert. 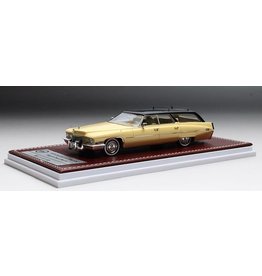 1 of only 2 made Cadillac Deville ASC Wagon,resin model in 1/43 scale.
This model was made for Dean Martin, the second been made for Elvis Presley.
Add to cart
Cadillac DeVille ASC Wagon(Dean Martin)1972(yellow/black.
€135,95
€115,56
Please accept cookies to help us improve this website Is this OK? Yes No More on cookies »