The de Havilland Aircraft Company Limited (/dəˈhævɪlənd/) was a British aviation manufacturer established in late 1920 by Geoffrey de Havilland at Stag Lane Aerodrome Edgware on the outskirts of north London. Operations were later moved to Hatfield in Hertfordshire.

Known for its innovation, de Havilland was responsible for a number of important aircraft, including the Moth biplane which revolutionised general aviation in the 1920s; the 1930s Fox Moth, the first commercial transport able to operate without government subsidy; the wooden World War II Mosquito multirole aircraft; and the passenger jet service pioneering Comet.

The de Havilland company became a member of the Hawker Siddeley group in 1960, but lost its separate identity in 1963. Later, Hawker Siddeley merged into what is eventually known today as BAE Systems plc, the British aerospace and defence business. The de Havilland name lives on in De Havilland Aircraft of Canada Limited, which owns the rights to the name and the aircraft produced by de Havilland's former Canadian subsidiary, including the Dash 8 regional airliner previously produced by Bombardier Aerospace. 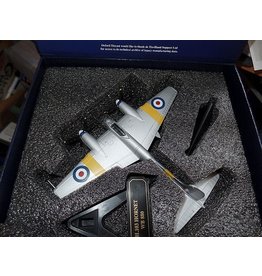 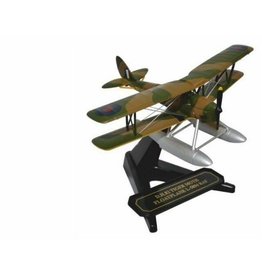 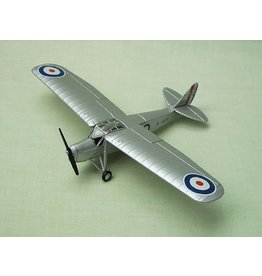 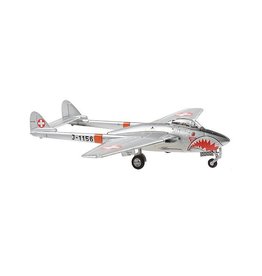 DH100, MK6, VAMPIRE, 1/72
The de Havilland Vampire is a British jet fighter which was developed and manufactured by the de Havilland Aircraft Company. It was the second jet fighter to be operated by the RAF, after the Gloster Meteor, and the first to be
Add to cart
VAMPIRE DH-100 MK6 J-1156 SHARKMOUTH
€76,75
€67,54
Please accept cookies to help us improve this website Is this OK? Yes No More on cookies »