At a time when the German and to a lesser extent the Italian governments pretty much bankrolled the (Grand Prix) racing operation in their respective countries, the French found a different way to motivate the local racing car manufacturers. It must have stung so badly that an Italian car held the speed record over 200 km on the high speed Montlhéry race track that the French national racing club raised 400,000 Francs from their members as prize money for the first French manufacturer to beat it before March 31st of 1937. One of the conditions was that the record breaking car should comply with the revised regulations for Grand Prix cars, which kicked in on January 1st of 1938. This meant the engine displacement was limited to 4.5 litres for a Naturally Aspirated engine or 3 litres with forced induction. They did allow for a tolerance of 10%. Sadly no manufacturer was up to the challenge. A conglomorate of French alloy producers were inspired by this effort and upped the ante to one million Francs and stretched the deadline to August 31st. They did require strict uphelding of the new regulations, so the potential record breaker could also represent France in international racing the following seasons. This time round it worked.

With this much money at stake quite a few French manufacturers were willing to take a gamble and the likes of Bugatti, Talbot Lago and Delahaye started to work on their record breakers. Talbot Lago bailed out relatively early and Bugatti worked on modifying an existing engine to meet the requirements. Delahaye, on the other hand, saw the bigger picture and decided to go all out and build a completely new engine from scratch. At that time their line-up of road and racing cars all shared a 3.5 litre six cylinder engine, which was not a likely base for a Grand Prix engine in that highly competitive era. The tubular ladder frame chassis, however, was well up to the task and served as a basis for the new racing car. The rules clearly favoured supercharged engines, but the company's lack of experience with forced induction pretty much ruled that out, especially considering the time restraints. No matter how advanced the new power-plant would be, it was highly unlikely it would produce as much power as the supercharged engines, so much attention was paid to saving throughout the design of the racer.

Possibly with help from the same companies that initiated the competition, Delahaye used lightweight alloys extensively in both the engine block and heads of their new V12. In an age when cast-iron engines were the norm, the use of aluminium alloy for the heads and magnesium alloy for the engine block was quite a daring move. It did not stop there though as the engineers came up with an interesting valvetrain as well. They employed the basic design used previously by Riley, which featured a camshaft on each side of the block actuating the intake and exhaust valves separately through push-rods and rockers. Three camshafts were used in the V12; a central camshaft inside the V for the intake valves and one on either side of the block for the exhaust valves. Breathing through three Stromberg carburettors, the compact and light V12 produced between 220 and 240 bhp depending on the fuel mixture used. In good French tradition, it was mated to a four-speed Cotal preselector gearbox. The Delahaye 135 derived chassis featured wishbones with transverse friction dampers at the front and an old fashioned live axle at the rear. 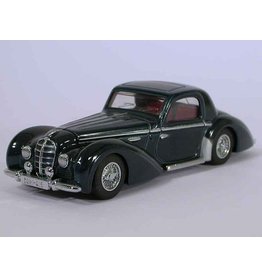