Of the long and distinguished list of American coachbuilders, the Walter M. Murphy Company firmly established itself as one of the most celebrated and memorable. In the early days of motoring, prior to earning a reputation for constructing some of the finest bodies for expensive luxury chassis, the Pasadena-based firm served as the California dealer for the impressive Simplex automobiles. A little later, Walter Murphy sold Leland Lincolns and then Duesenbergs – the marque that eventually brought him fame.

The coachbuilding aspect of Murphy’s business initially began as an aside. When he discovered that the Leland Lincolns he sold were often considered a bit staid and conservative for his West Coast clientele, Murphy decided to alter the top and paintwork, giving them a more modern, dashing appearance. By the 1920s, Murphy’s coachbuilding enterprise had grown by leaps and bounds. He had acquired equipment and a talented staff from the New Jersey-based Healey & Company and began to make a name for himself among wealthy patrons that included industrialists, Hollywood stars and automotive enthusiasts.

Although the Walter M. Murphy Company constructed bodies for a number of expensive automobiles including Rolls-Royce, Mercedes-Benz and Packard, they are most famous for their work on the Duesenberg Model J, a chassis for which the company built some 140 bodies. Although Murphy made a wide array of styles, from formal Town Cars to Clear Vision Sedans, the most popular (and emblematic) was the Convertible Coupe that accounted for over one-third of Murphy-bodied Duesenbergs. The style became so popular that, by the early 1930s, Murphy had begun to construct “bodies in white” so that customers clamoring for the popular open body would not have to wait to receive coachwork for their new Duesenberg. 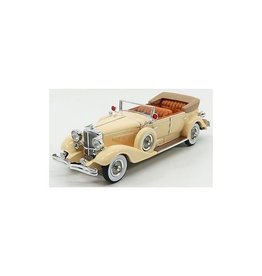