Hispano-Suiza (Spanish for 'Spanish-Swiss') is a Spanish automotive–engineering company. Hispano-Suiza was founded in 1904 as an automobile manufacterer which eventually had several factories in Spain and France producing luxury cars and aircraft engines. In 1923, its French luxury car subsidiary became a semi-autonomous partnership with the Spanish parent company. In 1946, the Spanish parent company sold all of its Spanish automotive assets to Enasa, a Spanish state-owned vehicle manufacturer while the French arm continued as an independent aviation engine and components manufacturer under the Hispano-Suiza name. In 1968, the French arm was taken over by the aerospace company Snecma, now part of the French Safran Group, and the Spanish Peralada Group (owned by the Suqué Mateu family). 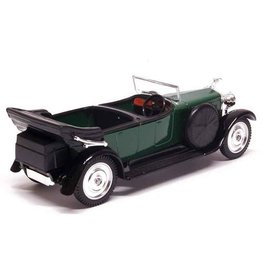 H6B Hispano-Suiza 1/43 diecast model
Add to cart
Hispano-Suiza H6B (1926)
€12,00
Please accept cookies to help us improve this website Is this OK? Yes No More on cookies »