The Institec Justicialista was a line of cars produced by the government of Argentina via IAME (Industrias Aeronáuticas y Mecánicas del Estado) from 1954 to 1955 as an early attempt to form an Argentine automotive industry. It used a front-engine, front-wheel-drive layout with a two-stroke two-cylinder engine derived from a German DKW design and a conventional metal body. Due to the insistence of General Juan Domingo Perón to have a sports car version made, a fiberglass two-seat version was available as a coupé or roadster, powered by a 1.5-liter air-cooled Porsche flat-four engine and a Porsche four-speed gearbox driving the front wheels.

When General Perón was overthrown in 1955, the project was abandoned, leading to the gradual disappearance of the Justicialista. It was later briefly revived as the short lived Wartburg-powered Graciela. Overall, the line was sparingly produced and had few sales, but was considered important because of its symbolic value to Argentina. 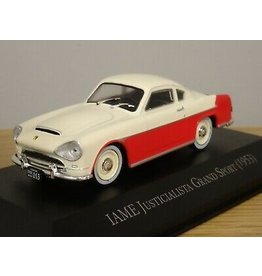