The company was founded as a producer of heavy-duty cranes. In 1954 the manufacture of military equipment was started with the ATS and ATS-59 artillery tractors, which were used for field work and reclaiming of oilfield in Tyumen region, in addition to many produced for export. The ATS-59 artillery tractor licence production was established in Poland. In October 1966, the production plan of the infantry fighting vehicle BMP-1 was prescribed by the government bylaw. In 1967, the mass production of vehicles began.

In the seventies, the plant was re-tooled for larger-scale military vehicle production. New power supplies were brought in, and the working area was increased by a factor of five. From 1983, the plant produced the BMP-2 model, and in 1987 began the manufacture of the BMP-3.

In 2008, the company said that it was pursuing a production processes optimization programme to make the operations more efficient. In the future the company aims to produce "hundreds of vehicles a year, rather than dozens of vehicles per annum", both for the Russian Army and for export.

Kurganmashzavod has received a large state contract worth $250 million for building and repairing an unspecified number of BMP-3 vehicles between 2007 – 2010. The company plans on investing about $40 million to re-equip its facilities.

In late December 2015, the company was reportedly "balancing on the brink of full stoppage" of its AFV production because of an outstanding natural gas bill of 55.5 million rubles (approximately US$764,000) to Gazprom Mezhregiongaz. 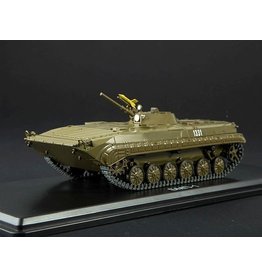