Moskvitch (Russian: Москвич) (also written as Moskvich, Moskvič or Moskwitsch) was a Soviet/Russian automobile brand produced by AZLK from 1946 to 1991 and by OAO Moskvitch from 1991 to 2001. The current article incorporates information about both the brand and the joint-stock successor of AZLK for the sake of simplicity.

OAO Moskvitch was a privatized venture name given to the former factory in order to avoid legal issues after the dissolution of the Soviet Union in 1991. Since the factory had no assembly branches outside Russia after 1991, its name is largely used today to refer to the building located in the lower eastern part of Moscow and abandoned since 2006.

The word moskvich (Russian: москвич) itself translates as "a native of Moscow, a Moscovite". It was used to point out the original location of the cars manufactured in the capital of Russia, Moscow. 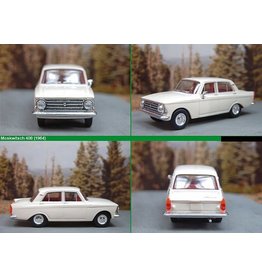