North American Aviation (NAA) was a major American aerospace manufacturer, responsible for a number of historic aircraft, including the T-6 Texan trainer, the P-51 Mustang fighter, the B-25 Mitchell bomber, the F-86 Sabre jet fighter, the X-15 rocket plane, and the XB-70, as well as Apollo command and service module, the second stage of the Saturn V rocket, the Space Shuttle orbiter and the B-1 Lancer.

Through a series of mergers and sales, North American Aviation became part of North American Rockwell, which later became Rockwell International and is now part of Boeing. 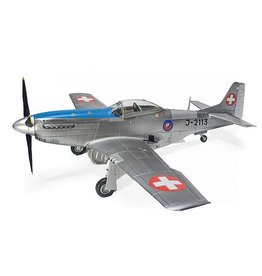 P-51 D, MUSTANG, 1/72
The Swiss Air Force operated a few USAAF P-51s that had been impounded by Swiss authorities during World War II after the pilots were forced to land in neutral Switzerland. After the war, Switzerland also bought 130 P-51s for $4,000
Add to cart
MUSTANG P-51 DJ-2113(MUSEUM DÜBENDORF)
€80,35
€70,71
Please accept cookies to help us improve this website Is this OK? Yes No More on cookies »