The Norton Motorcycle Company (formerly Norton Motors, Ltd.) is a brand of motorcycles, originally based in Birmingham, England. This company is owned by Indian multinational giant TVS Motor Company. For some years around 1990, the rights to use the name on motorcycles was owned by North American financiers. From 2008 to 2020, a line of motorcycles was produced under owner and chief executive Stuart Garner. Due to financial failure with large debts, in April 2020 administrators BDO agreed to sell certain aspects of Garner's business to Project 303 Bidco Limited, a new business established for the purpose with links to Indian motorcycle producer TVS Motor Company.

The business was founded in 1898 as a manufacturer of "fittings and parts for the two-wheel trade". By 1902 the company had begun manufacturing motorcycles with bought-in engines. In 1908 a Norton-built engine was added to the range. This began a long series of production of single and eventually twin-cylinder motorcycles, and a long history of racing involvement. During the Second World War Norton produced almost 100,000 of the military Model 16 H and Big 4 sidevalve motorcycles.

When major shareholders started to leave Norton in 1953 the company declined and Associated Motor Cycles bought the shares. Although motorcycle sales went through a recession in the 1950s, and Norton Motors Ltd was only a small manufacturer, Norton sales flourished. A series of Norton Dominator Twins of 500 cc, then 600 cc, then 650 cc and then the 750 cc Norton Atlas kept sales buoyant, especially with sales to the United States.

In 1968 the new 750 cc Norton Commando Model appeared, with the engine/gearbox/swingarm unit isolastically insulated from the frame with a series of rubber mountings. This kept the vibrations from the rider, giving a smoother, more-comfortable ride. The Commando was a best seller, and voted #1 Motorcycle of the Year a number of times in Britain. 850 cc models appeared for 1973, giving more torque. For 1975 an electric start arrived in the 850 Mk3.

The largest UK motorcycle manufacturer at the time was BSA-Triumph, comprising Birmingham Small Arms Company in Birmingham, and Triumph Motorcycles in Meriden. BSA-Triumph faced difficulties caused by poor management, outdated union practices, old-fashioned motorcycle designs and antiquated factory conditions. A merger with Norton Motorcycles was proposed; but although Dennis Poore's Norton Motorcycles was by far the smaller partner, Poore effectively secured a take-over of BSA-Triumph, forming Norton Villiers Triumph (NVT). The Triumph factory Meriden was the least modern; but workers engaged in a "sit-in", forming a workers' co-operative. Poore was CEO of Manganese Bronze Holdings, a company apparently more concerned with asset stripping than with motorcycle production. Subsequent political manoeuvrings led to the downfall of NVT, as taxpayer-assisted wranglings over amalgamations and sell-offs all but killed the once extensive UK motorcycle industry.

In late 2008, Stuart Garner, a UK businessman, bought the rights to Norton from some US concerns and relaunched Norton in its Midlands home at Donington Park where it was to develop the 961cc Norton Commando and a new range of Norton motorcycles.

On 29 January 2020, it was announced that the company had gone into administration. Administrators BDO were appointed by Metro Bank. The company had been in court over £300,000 of unpaid taxes due to HM Revenue and Customs, from an original amount of £600,000, with company representatives stating that £135,000 in "outstanding research and development tax relief" was overdue and would substantially reduce the amount owed. HMRC gave the company more time to pay and the court case was adjourned until mid-February. There were reports that there had been fraudulent wrongdoing which affected hundreds of pension holders who invested in the company, Norton customers, and staff; government ministers had endorsed Norton as millions of pounds of government grants and loans were provided. An associated business owned by Stuart Garner, the nearby Priest House Hotel, is also in administration, being run temporarily by an outside hotel chain.

On 17 April 2020, it was reported that India's TVS Motor Company had acquired the business in a cash deal. In the short term, they intend to continue production of motorcycles at Donington Park using the same staff. Former CEO Stuart Garner will not be involved in the new business. 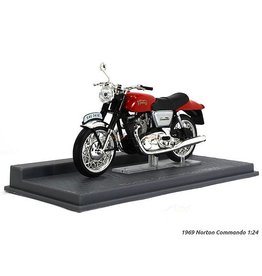