After WWII, the newly organized Austrian Army was equipped with the surplus US Army Willys MB and Ford GPW Jeep. A decade after hostilities ended, the Austrian Army was considering the retirement of the aging Jeeps in favor of something more contemporary as well as locally designed and produced. The design genius of Erich Ledwinka (son of legendary Tatra designer and father of the Volkswagen Beetle Hans Ledwinka) was utilized by the Austrian firm Steyr-Daimler-Puch to produce and field test prototypes. Its extensive similarities with the larger Tatra all wheel drive trucks are obvious, it has even been referred to as 'A little Tatra'. Once the production model design was finalized, the trucks were manufactured between 1959 and 1975 and were exported all over the world. The manufacturer designated the trucks as "Type Multipurpose Passenger Vehicle". A total of 16,647 were made. (See Military Use below.)

The majority of the Haflinger trucks entered directly into the hands of private owners around the world with a small number also being placed into municipal, ambulance and fire brigade services. Like its predecessor, the US Army Jeep, Haflinger trucks are at home both off and on road. They have been licensed for on-road use throughout Europe, North and South America, Asia, Africa and Australia. During their 16-year production run they were sold in Austria and exported to thirty-five other countries. The first trucks to see use in the United States arrived in 1960. In 1983 one was driven from Vermont to California, while Austrian travel journalist Ernst Wiese in his book 10,000 Miles Through Arabia described his four-month return journey from Vienna to the southern tip of the Arabian peninsula. Its multi-functional capabilities meant it was described as a car, a truck and the "Austrian Jeep". 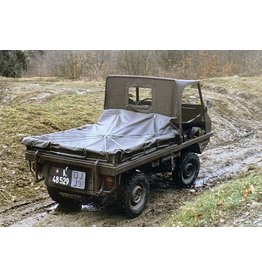 Small pick-up AP 700 Haflinger in resin, 1/43
The Haflinger is a small, lightweight, four wheel drive, high mobility cab over vehicle about 3.5 m long and 1.5 m wide, powered by a 643 cc flat twin horizontally opposed, rear mounted, air-cooled engine. W
Add to cart
Haflinger AP 700 with plane on the back.
€141,60
€120,36
Please accept cookies to help us improve this website Is this OK? Yes No More on cookies »