The plant built streetcars (trams) from 1901. The first tram was made for Tbilisi. In 1960, the enterprise created a special design office to design tramway rolling stock, which has developed about 20 models of trams. The factory set a world record for the number of cars produced for one model (14,991 cars of model KTM-5 M (71-605)).

Currently, the plant produces low-floor trams of different variations of models 71-623 and 71-631. In 2006 the factory built the first of a low-floor articulated tram car type 71-630 (trialled in Moscow). In 2009 UKVZ released two partially low-floor single-sided single-section cars of type 71-623, which went on trial in Ufa and Nizhny Novgorod. Additional trams of these models were built in 2010 for Moscow, Perm, Nizhnekamsk and Krasnodar. The plant also produces spare parts for trams and manufacturing service maintenance of trams.

In accordance with the Decree of the President of the Russian Federation dated 11 June 2011 number 772 and the Federal Government on July 7, 2011 № 1159-r of the Federal State Unitary Enterprise Ust-Katavsky Car Building Plant Kirov was converted into a branch of Federal State Unitary Enterprise Khrunichev State Research and Production Space Center. 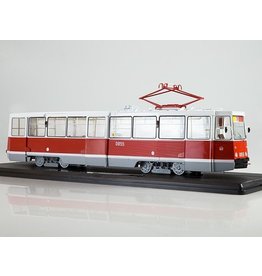